Great Org Charts. For ALL Your Great Players.

North American baseball fans are currently immersed in the baseball playoffs leading up to the World Series.

In our hometown of Toronto, the Blue Jays have capped an incredible second half of the 2015 season with an improbable down-2-games-then-win-3-games come from behind series win against a formidable Texas team that had its own amazing season…highlighted by a signature instant classic home run (including controversial triumphal bat toss) by Jose Bautista to cap the come from behind victory in a crazy Game 5 finale.  Team mate and rumoured MVP candidate Josh Donaldson, himself no slouch in the slugging department, commented of Bautista “he is my hero”. The Jays are trying to escape a 22 year drought in baseball playoff appearances, and their team looks like it has all the tools it needs to move forward in the playoffs.  But, at the end of the day, in sports as in life, it is all about execution, as the saying goes.

Bautista’s home run reminded me of one of the best sports interiew insights I ever heard – featuring hockey player Jarome Iginla inteviewed shortly after linemate Syndney Crosby scored the 2010 Olympic Men’s Hockey game winning “golden goal” for Canada in Vancouver, driving the city and most of the rest of the country into a similar state of euphoria as erupted Wednesday night in Toronto and across the country.

Pressed by a reporter minutes after that goal to comment on the outcome, given Crosby’s less than spectacular performance in the Olympics up to that time (the reporter prodded), Iginla simply and profoundly commented:  “great players do great things“.

And so they do.  Pick your sport.  Pick your player.  Pick your moment.   If you are a sports fan of any kind, you will have a few of them burned into your memory.

So what about real life?  Who are the great players on your team?  The leaders, the motivators, the energizers, the team builders…and those who do the equally important work, as a recent HBR blog noted, of “holding the office together“.   When (if?) you pull up the org chart can you identify them?  Do you know who they are, and what they are doing?  Can you think clearly to yourself about what you are doing for them, how you are engaging and motivating them? Are you helping them create the relationships that will give them the structural and emotional support at work they need to succeed?

We talk a lot at Organimi about organizational design, as an organic and elemental process.  As Henry Mintzberg recently noted in “We Need Both Networks and Communities“, effective organizations “function as communities of human beings, not collections of human resources”, making it imperative for managers to be effective networkers, communicators, and community builders.   According to Linda Hill and Kent Lineback in “Three Things Manages Should Be Doing Every Day“, this means that, for managers, every day should involve building trust, building teams, and extending networks.

How can busy managers realistically expect to do all that…when so much is already on their plates.

Organimi is a great tool to help you in this process of trust, team and network building, whether you are working with a team locally or managing a virtual team that spans the the globe, across multiple time zones and organizations.

By creating the connectedness at the core of these communities and networks Organimi helps point the team in this direction of improved transparency, communication and collaboration.

It is easy to create an account and start using Organimi…. to create great org charts, photoboards and directories for your team….right away.  With Organimi creating org chart templates is also a breeze, if you are doing work for many different clients who share similar organizational designs.

You can upload your team roster in seconds and automatically create your charts by following the easy data import instructions.  From there, you can drag and drop team members to roles, right away, as the team evolves.

Organimi org charts are cloud based, so everyone on your team can access them anywhere, at any time, and from any device, especially if you are looking for org charts optimized for Google Chrome or Firefox.

Organimi is also incredibly inexpensive to deploy and use.   For many small organizations the basic features are free.  In today’s tight fisted environment, and with high failure rates for many IT deployments, cost matters, and the value to cost ratio for Organimi is compelling.

Find out for yourself! You can learn more by checking out the online videos and self-help tools.

There is no simpler or more cost effective way to help support the communication, networking and community building goals of your team.

Home runs to win championships are the stuff of highlight reels, storybooks and legends.  The stars will almost always shine and stand out.

But in business, as in sports, building up the teams and supporting networks that permit those great players to do great things takes a whole lot of time, effort and energy….as well as some recognition from your managers that there is truly greatness in everyone, if you know how and where to look for it. 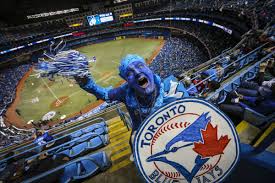 As always, thanks for reading…..And Go Jays Go.