Org Charts For The Virtual Organization: Big, Small & Everything In Between 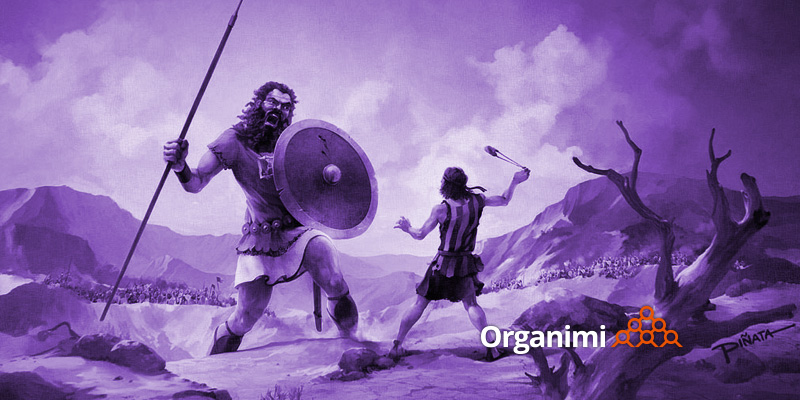 The Bigger They Are The Harder They Fall…Yes, No, Maybe So? Today we’re bringing the “David and Goliath” theme to the world of virtual organizations.

You may have heard about Malcolm Gladwell (the author of best selling titles The Tipping Point, Outliers and Blink) or read his recent book David and Goliath: Underdogs, Misfits and The Art of Battling Giants. Since it was released in time for the 2013 holiday season, some of you may have even found it under your Christmas tree or in a stocking this year.

You can read a review of Gladwell’s book here or, even better, listen to Gladwell in a recent TED talk give an entertaining account of its central theme here.

The TED talk is awesome. Gladwell is both geeky and captivating, speaking for 15 minutes without a break in an intimate venue, and in an animated manner, He nicely sets the stage for the David and Goliath story at the core of his book (and this blog).

In the podcast Mele also hooks into the David vs Goliath theme, focusing on the challenges large organizations and institutions face in surviving and thriving in the current business climate.

Mele adopts a popular headline grabbing strategy – putting a controversial thesis in play for debate by making a far-reaching statement about how large organizations of all stripes – manufacturers, retailers, law firms, governments, universities, armies, entertainment conglomerates – are failing their customers….and describing how they are being eaten up by smaller, more agile, competitors.

Presumably we can add telecom companies, banks, public schools, airlines, hospitals, and most other large institutions that dominate our lives. We all know how badly we feel about their customer service sometimes!!!

Mele describes how technology is making disruptive innovation ever easier. As he comments “when an institution is not doing a very good job at something, that’s an incentive to people to opt out. And our technology makes it easier than ever before to seek alternatives.”

Is It Dog Eat Dog, or Dog Eat Underdog? Are There Alternatives?

So why is the David and Goliath story — the struggle between the big and the small; the underdog triumphing against the odds — so prevalent these days.

David and Goliath has been a great story for a long time. Recent examples are too numerous to count… as the many “Hollywood endings” that we see in films confirm. People absolutely love to read, hear about, and share stories with David and Goliath overtones, even though we know they are not exactly true, in reality, at least very often. The entire “stick it to the man” sub-culture is based on this.

But is it really happening at an increasing rate these days? Have things changed? Or is this all more or less wishful thinking?

Sure there are examples of the mighty who have fallen – from the corporate titans like Kodak or Enron or Sears, to the politician and celebrity train wrecks we love to read about….(until we don’t anymore). At Organimi we’ve seen this up close and personal in our home turf in the Toronto area, with the infamous and debauched mayor Rob Ford. But stories like these are usually ones of pride or self-inflicted gunshot wounds, or both. If we really keep count, we know that much more often, the underdog doesn’t win.

This year’s Super Bowl, for example, is between the top two teams in the league. (Check out the org charts we created of the back office teams behind the league champions with Organimi here). The US banks that were “too big to fail” are now even bigger. Wall Street is rocking along the come back trail. The world’s largest corporations and wealthiest individuals have continued to grow their share of the world’s wealth – the so called “1%”. The “big” are very good at winning.

We’re pretty confident that in the real world struggle of today between David and Goliath the real winner would be the guy with the gun. As the old adage goes, “if you’re heading into a gun fight, don’t take a knife.” Reminds us of the iconic sccene from Raiders Of The Lost Arc with Harrison Ford and the Swordsman.

It’s About The Technology (Stupid)…

So what are we to make of this fascination with the narrative, with the illusion of the small triumphing over the great, as this theme relates to virtual organizations and organizational design?

Both Gladwell and Mele shed some useful light here.

Gladwell comments on the “real story” – the superiority of David’s slingshot over Goliath’s cumbersome armour, and the many other situational and tactical advantages David held, shifting the narrative around to focus on the relative strengths of these combatants.

Which really leads to the point of today’s blog: understanding how the interplay between “cloud computing” and “virtual” organization design is changing the way tomorrow’s organizations will be created, managed, operate and succeed.

Mele notes the important relationship between technology and organizational success. As he states, technology is “getting cheaper and faster and easier to implement for smaller and smaller players while bigger players are stuck with legacy systems and can’t turn over on a dime, can’t adopt a new system that might bring gigantic gains in efficiency overnight”.

This is the true dynamic at work: those organizations most adept at leveraging the “latest and greatest” in technical innovations will get things done – faster, better and cheaper. Google, Amazon, the open source movement, and Obama’s organizing committee – these organizations all demonstrate that the David’s of the world can accomplish incredible things and in the enterprise domain achieve market dominant positions, becoming the Goliaths of tomorrow. Amazon’s focus on building an organization leveraging technology to predict what you will order next week, and deliver it by a drone drop off (two recent headliners) is an interesting juxtaposition with Sears announcement this week that it is closing its flagship Chicago store.

You’re A Shining Star, That’s Who You Are

We think the “narrative arc” is the real storyline – some become the superstars, some rise and achieve more or less stable orbit for a time, others rise and fall; some spectacularly so (aka the crash and burn story).

For organizations concerned about survival and growth, two important elements of staying aloft, are linked to understanding your environment, and ensuring your organizational design is adaptive enough to survive the pace of change you are experiencing in it.

Mele invites organizations “first to rethink your customers. Imagine they have more power to control your company than you do, and then figure out how to use that to your advantage in the production, in the marketing, in the customer support, whatever it is. You have to acknowledge the power people have with their internet connections and their smartphones and use it to your advantage. And the second thing you have to do, I think, is structure your org chart and your corporation to be nimble, to be fast moving, to navigate the digital world with the speed that your much, much smaller competitors will”

And that’s what Organimi aims to help you do.

Going more and more virtual is an inevitable part of the evolutionary process for organizations. It absolutely is happening, will continue to happen, and fundamentally has to happen, for a whole host of reasons you can read about in our white paper. Think about the power of being able to harness, organize and leverage the best available resources globally when ever you want, and where ever they are – likely at lower cost. The Davids out there are doing just that…and successfully knocking the Goliaths off their pedestals across multiple industries.

And going and being virtual is inextricably linked with the trends towards cloud and crowd computing. More and more organizations are coming to recognize that moving to the cloud, and leveraging the crowd, from a technology point of view will be critical to their success in embrancing customers, driving revenue, reducing cost, enhancing efficiency and maintaining staff. This is not fiction. The recent financial results announcement of IBM, an industry bellwether (check out the origins of that weird old word) speak to this trend. Cloud technologies and services are the stand-out growth area while traditional big stack technologies are in decline. The same story plays out at Oracle, Microsoft, HP, Dell and other tech sector giants.

So in terms of embrancing, adopting and using the technologies that enable that process, will your organization be with David, or with Goliath. Will you be using virtual organizational designs to win, or will you be waiting to get rocked between the eyes.

This is where Organimi comes in — as an agile cloud based tool for organizations that want to experiment with the changing organizational design patterns they’ll need to adopt to stay agile, with increasingly “virtual” teams. We’re part of this exciting journey, and hoping to help in this process by being the organizational design solution for firms that want to help people stay connected, collaborating and communicating effectively in virtual work environments.

Your organization is likely a lot more virtual than you may recognize today. Whether you are big, or small, or anything in between; whether you are on your way up, or on your way down, or just motoring along, whether your teams are physical or virtual, inside the firewall or outside of it, Organimi provides you with the ability to easily experiment with new patterns and designs for your teams.

Check Organimi out. Get organized. Start charting the path of your team to and through “V space”.