How LinkedIn Has Changed The Recruiting Industry 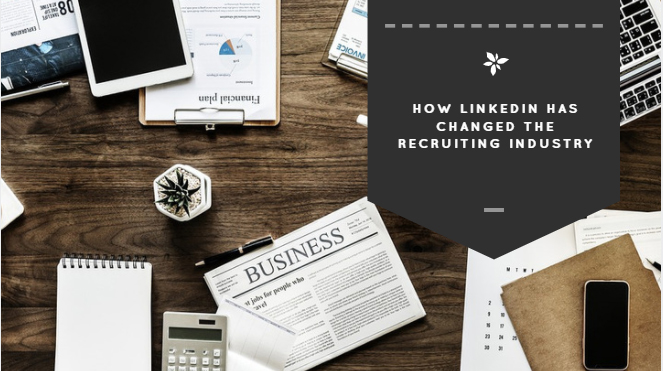 LinkedIn was founded in 2002 and shortly thereafter dubbed themselves as “The World’s Largest Professional Network.” Of course, there wasn’t a whole lot of competition out there in terms of online professional networks, so it wasn’t really too difficult for LinkedIn to claim that spot.

For years, LinkedIn remained somewhat of an oddity in the online landscape. By all accounts, they were one of the first social networks on the scene, but their professional focus limited their popularity and forced them to play second fiddle to early social media entrants like MySpace and Friendster.

Slowly but surely over time, LinkedIn continued to make strides and carve out their own place in the landscape. With each new update to their platform, new features were introduced that made LinkedIn more useful and more user-friendly. Even in their earliest days, it was clear that they were working toward a big goal — to become a platform that is useful for recruiting.

In the early days, LinkedIn had all sorts of rules around what recruiters could and couldn’t do on the platform. They were quite strict, and this somewhat limited the amount of activity on the site. But as they started to gain popularity and the prospect of an initial public offering crept into their field of view, we saw their stance on recruiting begin to shift.

LinkedIn Welcomed Recruiters Ahead of IPO

Simply put, LinkedIn needed to be embraced by recruiters in the lead up to their IPO. By putting recruiting features behind a paywall, LinkedIn had successfully made recruiters their main source of revenue as they prepared to take their company public. They were the earliest adopters of premium accounts, which provided them with a wealth of information on potential candidates. While LinkedIn did have an advertising platform, by 2009 over 40 percent of the companies revenue was derived from Premium Subscriptions, and most of those came from the recruiting industry in one form or another.

Since that time, the company has made a point of diversifying their revenue. However, the initial push toward recruiters in the years leading up to their initial public offering was clear, and once they embraced their platform as a recruiting platform, there was no turning back. By then, they had already changed the way the recruiting industry worked on a fundamental level.

How Recruiting Once Was

To understand the impact that LinkedIn had on the recruiting industry, you have to understand what the industry looked like before there was a LinkedIn. In the old days of recruiting, companies leveraged headhunters and recruitment firms as their go-to way for identifying high-level talent for mid-level and senior management positions. Headhunters often kept a huge database of talent that they interfaced with personally often while they were searching for work. Recruiters and recruitment firms maintained private databases of talent that companies gained access to when they hired the company.

The processes were streamlined and standard. Candidates would interview with a person at the recruitment firm, who would then connect them to a number of potential employers. The personal information of candidates wasn’t widely available, and LinkedIn changed that fact.

Recruiters Embraced the Platform out of Necessity

If recruiters weren’t already using LinkedIn as their primary recruiting platform by the time the company launched their IPO, they embraced it shortly thereafter. Most companies today, including the largest Fortune 500 companies, have transitioned to focusing on recruiting in-house instead of going with outside firms. With a database like LinkedIn available with the click of a button, they were able to get a similar level of talent acquisition at a much cheaper price.

One of the main complaints regarding this shift has been the move away from personalization in the recruiting process. Recruiters are less interested in getting to know their candidates and many are operating under a “quantity over quality” outlook. The suite of recruitment tools that LinkedIn released has also contributed to this outlook in some ways, making it easier than ever to sift through their extensive database, identify candidates that might be a good fit for a position, and contact them about the opportunity.

The platform makes it easy for recruiters to sift through candidates for specific jobs and manage searches for multiple jobs as well. It also integrates directly with the popular recruiting application tracking systems, making it an easy for choice for companies that want to have access to the world’s largest pool of talent.

Bots and A.I. in LinkedIn Recruiting

The next big step in LinkedIn recruiting will come from bots and artificial intelligence. While there are third-party solutions that use the LinkedIn platform using automation and A.I., LinkedIn continually makes it easier for recruiters to contact a huge range of potential applicants in one fell swoop. Plenty of recruiters are also using their own third-party and in-house developed tools, which could potentially break the terms of service of the platform in some cases.

LinkedIn quickly changed the entire recruiting industry. Once the choice was made to embrace recruiters reaching out to talent on the platform, the floodgates opened. The biggest change came from the downsizing and diminishing returns that recruiting and talent agencies were able to provide to companies. Today, most companies have their in-house recruiting teams even if they still contract with some firms occasionally. In fact, many teams focus solely on LinkedIn recruiting.

Recruiters of today have access to more qualified applicants than ever before, thanks to LinkedIn. That fact doesn’t look like it is going to change anytime soon either, as LinkedIn continually develops new tools to make recruiting on the platform easier and more effective.