Hoffman-La Roche (Roche) is a leading Swiss multinational healthcare company that operates worldwide in pharmaceuticals and medical diagnostics; it is 122 years old, is family owned, employs around 94,000 people in more than 100 countries, and is the world’s largest biotech company.  Headquartered in Basel, Roche is also the world’s fifth-largest pharmaceutical company in by revenue and the leading provider of cancer treatments globally.

Founded in 1986, the company gained early notoriety for producing various vitamin derivatives. In 1934, it was the first company to mass-produce synthetic vitamin C and in 1959, it developed the class of tranquilizers known as benzodiazepines, with Valium and Rohypnol being among its most-known members.

Get Started for Free

In keeping with most large organizations, Roche is led by both a board of directors, who are responsible for strategic and operational decision making, and a team of high-level executives known as the executive committee, which is collectively responsible for the day-to-day management of different areas of the business. 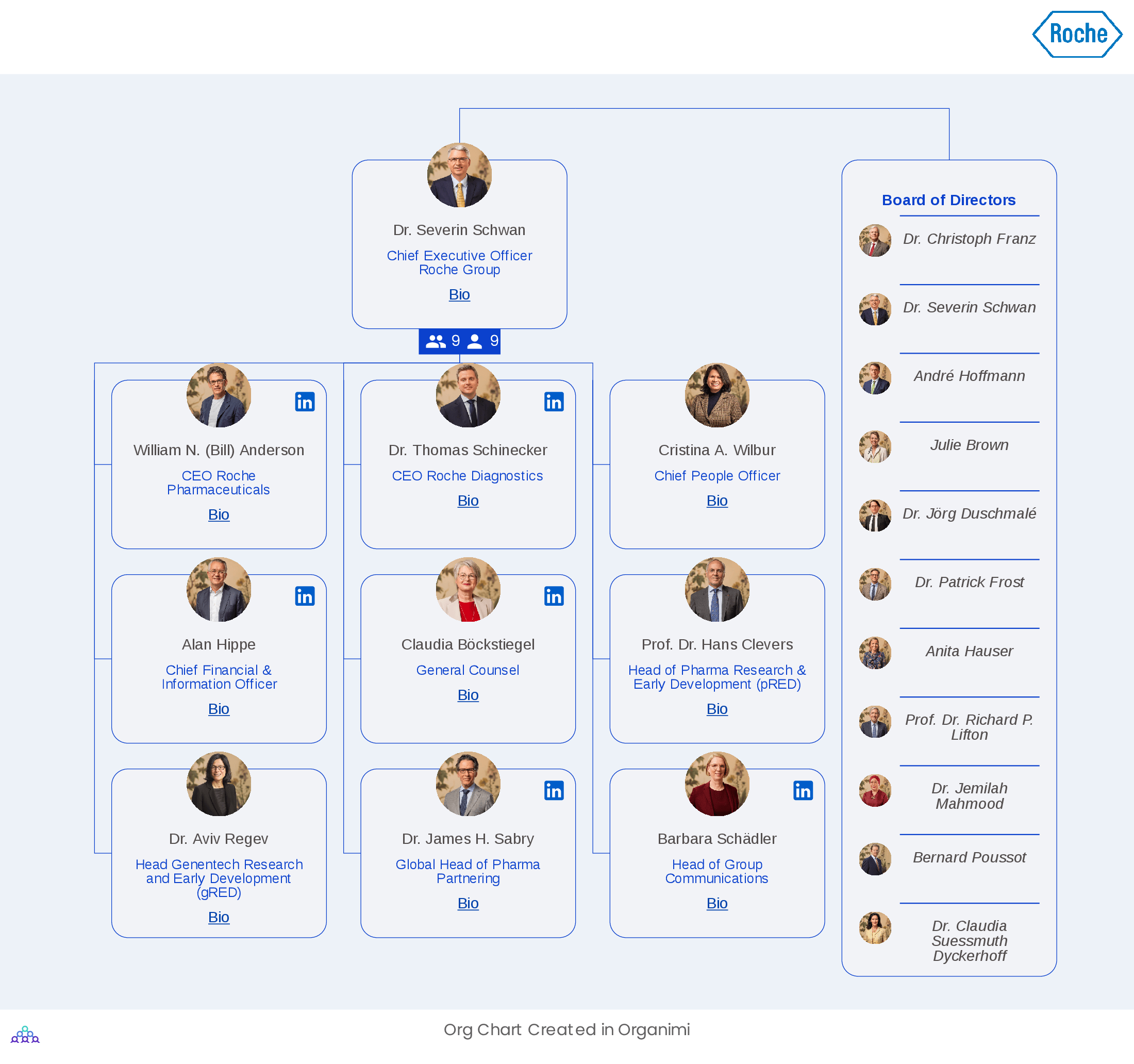 Overall, Roche Group is led by a Chief Executive Officer who is supported by the two CEOs of the Group’s two main business divisions: Roche Pharmaceuticals and Roche Diagnostics. Immediately subordinate to Roche’s three CEOs are a group of other C-level executives and the heads of the Group’s higher-level functions, including Finance & Information, Pharma Research & Early Development (pRED), Pharma Partnering, and Group Communications.

Roche’s organizational structure mirrors the divisional org structure type, one which many of the world’s leading companies choose to manage their operations.

In a divisional structure, people are grouped together based on the product or service they provide, not the work they do. In this case, Roche has two CEOs for both the Roche Pharmaceuticals and Roche Diagnostics business arms who oversee all operations within their respective divisions and report back to the overall Group CEO. This is necessary because the nature of Roche’s operations is highly specialized, and the two different groups will have their own operations and operational requirements that differ vastly from one another.

Because divisions have their own management groups to lead them, it’s easier to hold individuals accountable for their actions. It also helps to provide the business with a competitive advantage in local markets by providing managers, and in some cases even employees, with more autonomy. Market share also benefits because divisional structures more easily accommodate expansion, innovation, product optimization, and more.

You can download the CSV file of Roche’s org structure, import it into Organimi and start editing this chart right away! Here’s how: