On Reddit, registered users submit content to the website such as links, images, videos, and text posts, which are then voted up or down by other registered users. These posts are organized by subject into user-created boards known as “subreddits”, with submissions that garner the most “upvotes” appearing at the top of their respective subreddits. Posts that receive enough upvotes ultimately appear on the site’s front page.

Founded by University of Virginia roommates Steve Huffman and Alexis Ohanian in 2005, along with Aaron Swartz, the site was acquired by Condé Nast Publications in October 2006. In 2011, Reddit became an independent subsidiary of Condé Nast’s parent company, Advance Publications. As of March 2022, Reddit ranks as the ninth-most-visited website in the world and the sixth most-visited website in the United States according to SEMRush.

Create a Chart, Photoboard or Directory! 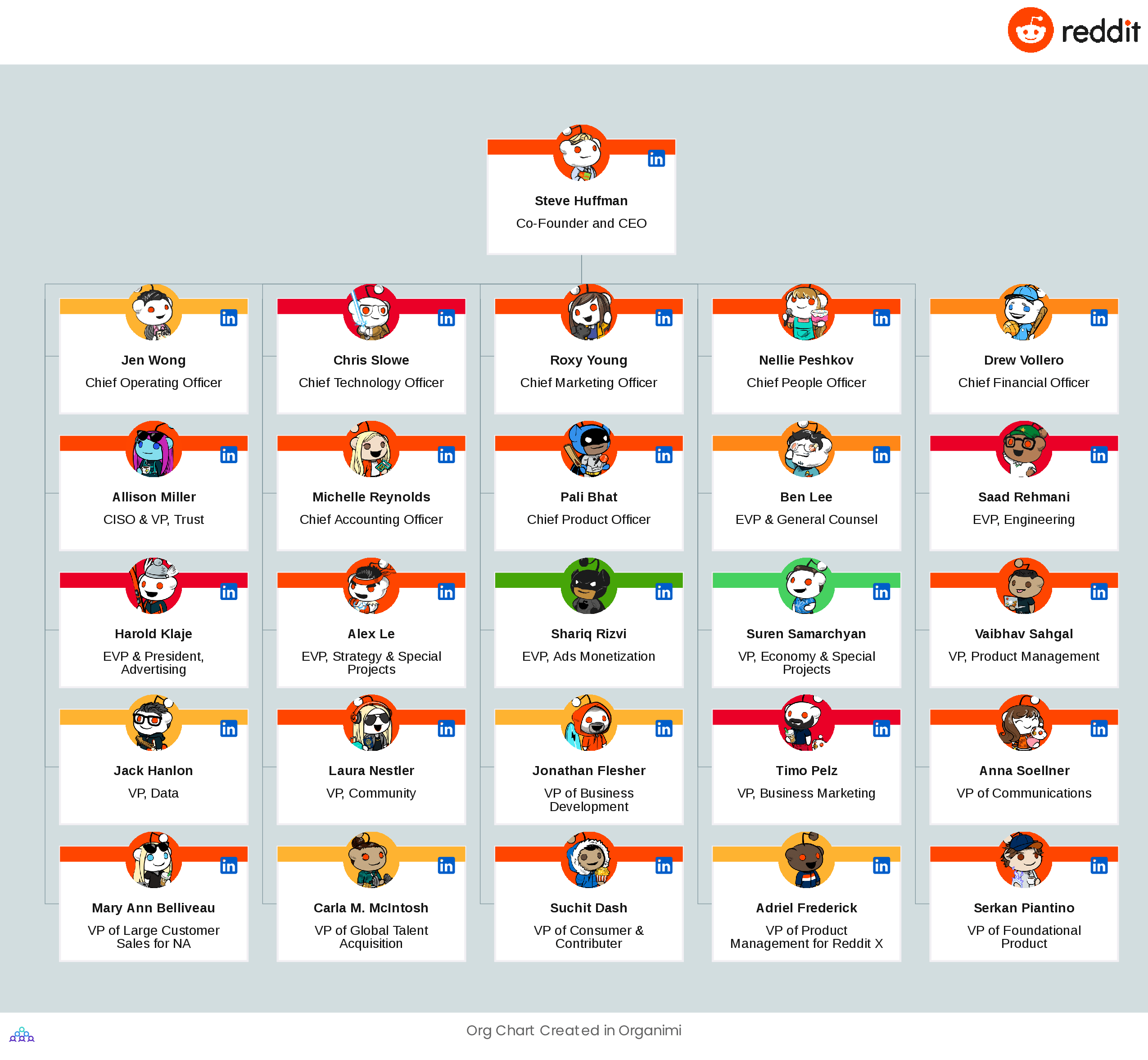 The CEO is supported by a team of C-level executives and vice presidents, including individuals responsible for Marketing, Product, People and Culture, and Finance. VPs include Global Talent Acquisition, Communications, North America Large Customer Sales, and Engineering.

Reddit’s organizational structure reflects that of a classic corporate hierarchy or chain of command.

A hierarchical organizational structure is one that resembles a pyramid, where authority cascades down from a single person at the top, such as a CEO, to different levels of management and supervision. It’s also commonly referred to as a company’s “chain of command” where general employees sit at the bottom and executives sit at the top.

Although this once-popular structure is arguably falling out of favor among organizations and is in some cases being replaced by more “modern” alternatives such as the matrix structure, flat structure, and functional structure, the classic hierarchy does have its uses and benefits.

In the case of Reddit, the company is relatively small in terms of its number of employees (c. 700) and the breadth of its operations, which are made up almost exclusively of the core reddit message board website alongside its advertising sales business. This means that a hierarchical organizational structure works much more efficiently in contrast to larger tech competitors with global diversified operations and thousands to tens of thousands of employees.

You can download the CSV file of Reddit’s org structure, import it into Organimi and start editing this chart right away! Here’s how: