The Public Investment Fund (PIF) is Saudi Arabia’s sovereign wealth fund, one of the largest in the world with estimated total assets in excess of US$620 billion. The PIF was created in 1971 for the purpose of investing the Saudi government’s funds into a diverse portfolio of international assets. Since 2015, the PIF has fallen under the control of Crown Prince Mohammed bin Salman, the country’s de facto ruler.

The PIF has attracted controversy for, as described by some media sources, being one of the least transparent sovereign wealth funds in the world, in addition to the Saudi government’s poor human rights record. The Wall Street Journal in 2016, for example, reported that none of the fund’s investments were publicly named. It’s also known that many of the fund’s domestic investments are funneled to firms owned by individuals with long-standing personal connections to the Saudi state.

In recent years, under the direction of bin Salman, some of the PIF’s assets have been publicly named, including a 36% stake in Posco Engineering, a 5% stake in Uber, and ownership of Newcastle United, an English football club. Many of the PIF’s current assets were transferred to it in 2017 following the so-called “anti-corruption purge” whereby the assets of 400 of Saudi Arabia’s richest people were seized by the state.

Many large organizations like the Saudi Public Investment Fund are overseen by a board of directors. This is the governing body of a company that’s elected by stockholders, with members often selected for their expertise in a particular area or their industry connections. PIF’s board is led by Crown Prince Mohammed bin Salman.

A board typically holds an advisory role, but some boards do have wide-reaching powers, duties, and responsibilities as stipulated by corporate law and government regulations, particularly in heavily regulated industries such as finance and pharma. Under bin Salman, the Board is responsible for overseeing PIF’s long-term strategy, investment policy, and performance.

An organization can normally also elect to give its board supervisory powers and oversight through its own constitution and by-laws. 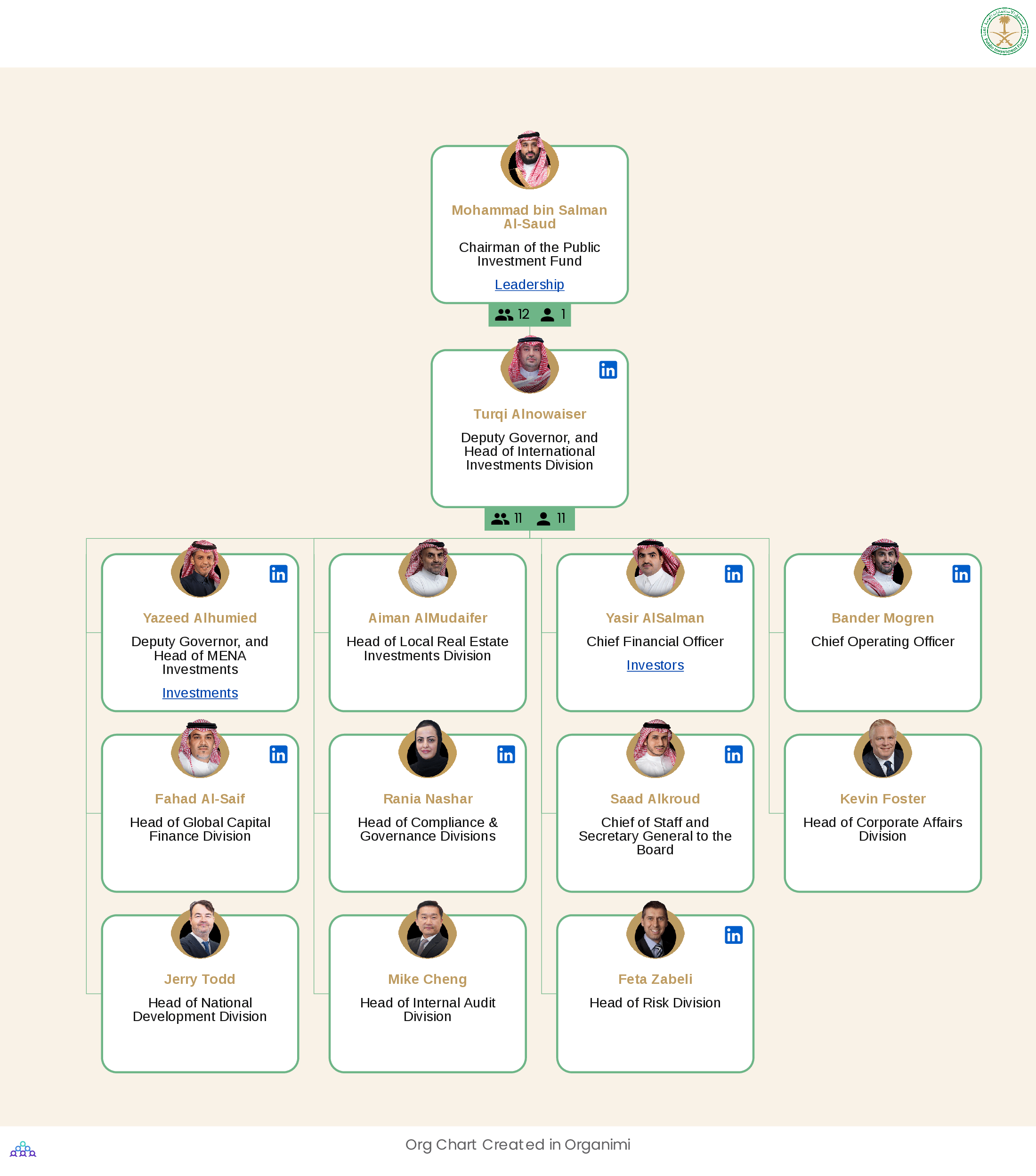 Given the relatively opaque nature of the Saudi Public Investment Fund, it’s not known for certain what sort of organizational structure it operates with.

We can, however, make a safe assumption that its structure reflects a traditional top-down hierarchy, with decision-making authority residing with the company’s upper management and flowing down the organizational hierarchy.

Crown Prince Mohammed bin Salman sits at the top of PIF’s hierarchy as its overall leader, with authority for day-to-day leadership seemingly passing down the chain from bin Salman to the Executive Management team where key individuals occupy key leadership roles. Authority and control then continue further down the chain of command to individuals who occupy junior managerial and non-managerial roles.

You can download the CSV file of Saudi Public Investment Fund’s org structure, import it into Organimi and start editing this chart right away! Here’s how: