Optus was founded in 1981 as ‘AUSSAT’ and today is a wholly-owned subsidiary of Singapore Telecommunications Limited (‘SingTel’), a Singaporean telecommunications conglomerate. The company is Australia’s second-largest wireless carrier and had 10.5 million subscribers in 2019.

Optus’s history can be traced back to the formation of AUSSAT at the end of the 1970s and the beginning of the 1980s.

AUSSAT was a government-owned national satellite company and was one of the first national communications satellite systems in the world. AUSSAT later became a publicly-owned company, AUSSAT Pty Ltd, and delivered satellite, television, telephone, and other communication services.

While AUSSAT successfully deployed several satellites and was credited with establishing a reliable service to residents of the Australian outback, the company was ultimately operating at a loss. With pressure to deregulate telecommunications growing stronger towards the end of the 1980s, the Australian Government decided to sell AUSSAT along with a telecommunications license to Optus in December 1991.

Since then, Optus has grown through several key mergers, acquisitions, and restructures that have diversified its operations and its service offering. Highlights for Optus include:

In 2013, Optel underwent a major organizational restructure to change from a network and telecommunications company to a “single ICT organization.”

At the time of the reorg, Optel said that this was to move Optel away from being a set of disparate organizations with strengths in either telecommunications or ICT, but not both. In the years preceding the reorg, Optel had gone through several key acquisitions that saw the company diversity and transform its product and service offerings.

Optus’ Organizational Structure and Why It’s So Effective

Rather than being led by a traditional hierarchy consisting of the C-level who oversee departments that fall somewhat within their remit, Optus was instead split into key functional divisions. These are:

Each functional division is led by a managing director who is a specialist in their respective field. Above these functional groups is Kelly Bayer Rosman, the CEO of Optus since April 2020. She is assisted by key C-level executives including CIO Mark Potter and CFO Michael Venter.

Functional organizational structures make sense for companies like Optus that have diversified business operations. Other examples of functional org structures can be seen in other large companies including Amazon and Disney.

The benefit of functional structures is that they give teams strategic control across their own business segments, enabling the smooth day-to-day running of larger businesses that often operate on a global scale. In the case of Optus, the company has major interests in both the United Kingdom and the United States through its subsidiaries. 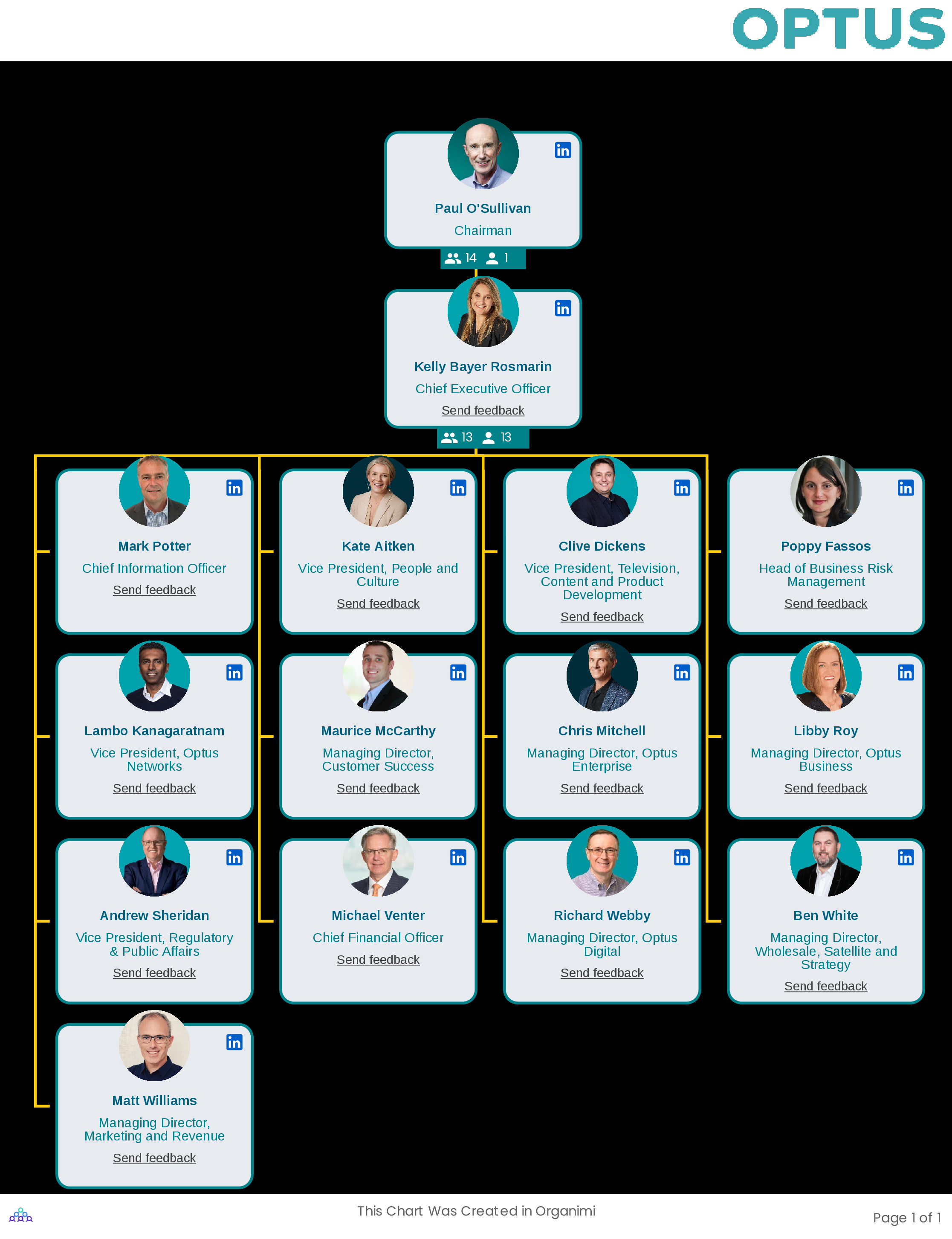 Here are some helpful blog resources that you can start with:

You can download the CSV file of Optus’ org structure, import it into Organimi and start editing this chart right away! Here’s how: