Nestlé is a Swiss multinational food and drinks processing corporation. It is the largest publicly held food company in the world and has been since 2014. In 2017, it ranked 64th on the Fortune Global 500 and 33rd in the 2016 edition of the Forbes Global 2000 list of largest public companies. Overall, Nestlé operates over 400 factories across 189 countries and employs almost 350,000 people globally.

The company was formed in 1905 by the merger of the “Anglo-Swiss Milk Company” which was established in 1866 by brothers George and Charles Page, and “Farine Lactée Henri Nestlé” founded in 1867. The company grew significantly during World War I and again following World War II, growing its offerings beyond condensed milk and infant formula products.

Today, some of Nestlé’s products include baby food, medical food, breakfast cereals, coffee, tea, bottled water, confectionery, dairy products, pet foods, ice cream, and snacks. 29 of the company’s subsidiary brands report annual sales in excess of US$1 billion, including Kit Kat, Nespresso, Vittel, Maggi, and Smarties. Nestlé is also one of the main shareholders of L’Oreal, which is the world’s largest cosmetics company.

Nestlé, like most organizations of its size and global reach, has a Board of Directors. The Board is responsible for managing the overall business and is currently led by Chairman Paul Bulcke, who is the company’s former CEO. 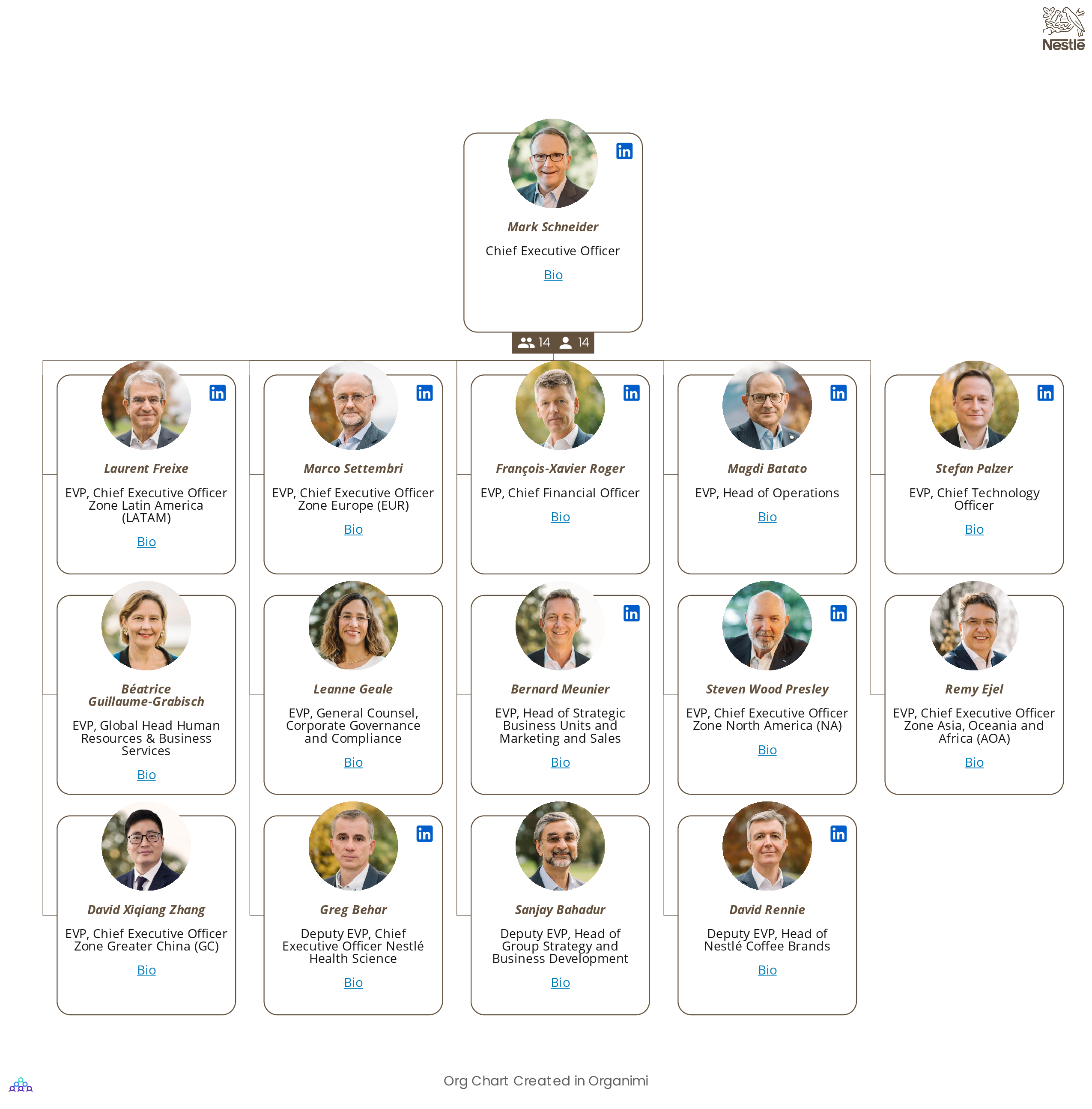 For a long time, Nestlé operated with a complicated, decentralized matrix structure organizational structure which permitted a high level of autonomy and independence within its subsidiary brands and companies.

In October 2021, however, the company underwent a major restructure and was reorganized into five new geographical zones to manage its global business. According to an official press release, these are:

Most of the company’s food and beverage operations are organized according to these zones, with the exception of its globally managed businesses, which include Nespresso and Nestlé Health Science.

According to Nestlé, the motivation behind this reorg was to help the company sharpen its geographic focus to drive growth everywhere it has operations. By focusing almost exclusively on geographic zones and organizing various business units under them, Nestlé is able to move closer to its customers and consumers and become more agile in a fast-moving environment.

You can download the CSV file of Nestlé’s org structure, import it into Organimi and start editing this chart right away! Here’s how: