American Airlines is a major US airline and, when measured by fleet size, scheduled passengers carried, and revenue passenger mile, is the largest airline in the world. Together with its regional partners and affiliates, the airline operates a huge domestic and international network that consists of almost 6,800 flights per day to 350 destinations across more than 50 countries.

American Airlines is also a founding member of the airline alliance Oneworld, along with British Airways, Canadian Airlines International, Cathay Pacific, and Qantas, which is the world’s third-largest airline alliance behind SkyTeam and Star Alliance. Collectively, the Oneworld alliance operates a fleet of more than 3,200 aircraft that serve 1,000 airports across 170 countries worldwide, serving more than 490 million passengers per year.

American Airlines is led by CEO Robert Isom, who assumed the role in March 2022. Reporting to the CEO are executive vice presidents and chief executives who oversee different areas of the business. These include the Chief People Officer, the Executive Vice President and Strategic Advisor, and the Chief Financial Officer and President of American Eagle.

The CEO reports to the Oneworld Governing Board, which is made up of the chief executives of each of the member airlines. The Board meets regularly to set the strategic direction of the alliance and to review progress. The chairmanship of the board periodically rotates among the alliance members’ chief executives. 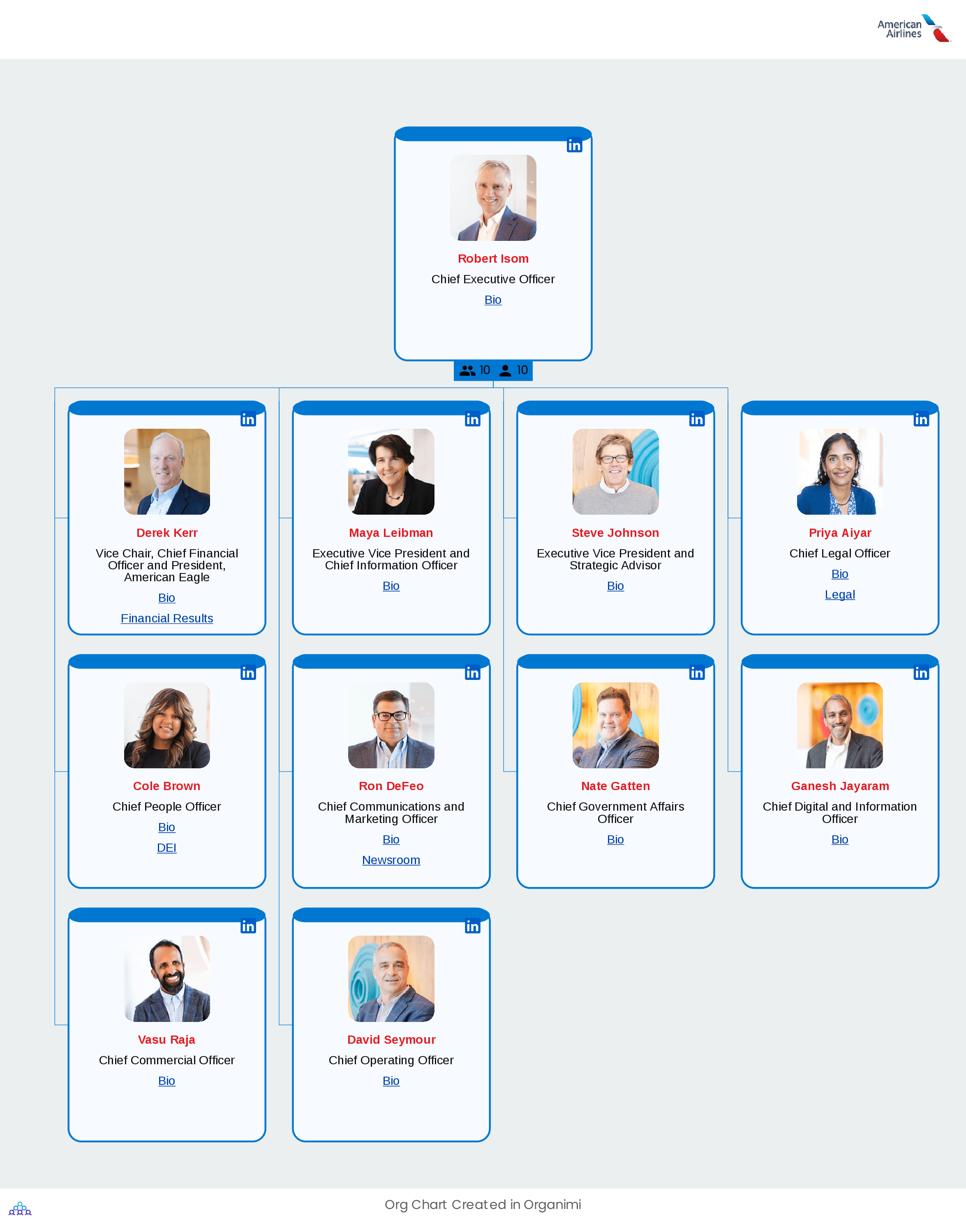 Many large organizations like American Airlines are also overseen by a board of directors. This is the governing body of a company that’s elected by stockholders, with members often selected for their expertise in a particular area or their industry connections.

American Airlines, like most other airlines, operates with both a hierarchical and a functional organizational structure whereby management is organized from the top down, with certain specialized departments or divisions based on the different functions of the business.

As illustrated by the org chart above, American Airlines has a CEO at the top of this structure who reports to the Board of Directors. Below the CEO are key executives overseeing functional groups and divisions such as the American Eagle subsidiary, Government Affairs, Operations, Digital and Information, and Legal. Within American Airlines’ structure, the workforce is specialized for their specific tasks, and each department is designed to fulfill certain objectives.

You can download the CSV file of American Airlines’ org structure, import it into Organimi and start editing this chart right away! Here’s how: