As of Q4 2021, Uber had more than 118 million monthly active users worldwide and managed 19 million trips per day on average. As of January 2022, the company has a 71 percent market share for ride-sharing and a 27 percent market share for food delivery. Seen by many as the company that kicked off the sharing economy alongside Airbnb, the company’s rapid growth led to the coining of the term ‘uberisation’ to describe the commoditization of service industries via online platforms and apps.

Despite the company’s market dominance and rapid growth, the company has reported losses of hundreds of millions or billions of dollars each year since 2014 (excluding 2018). In 2021, the company’s operating income was reported as minus (-) US$3.83 billion.

Here’s a look at the current roster of Uber executives: 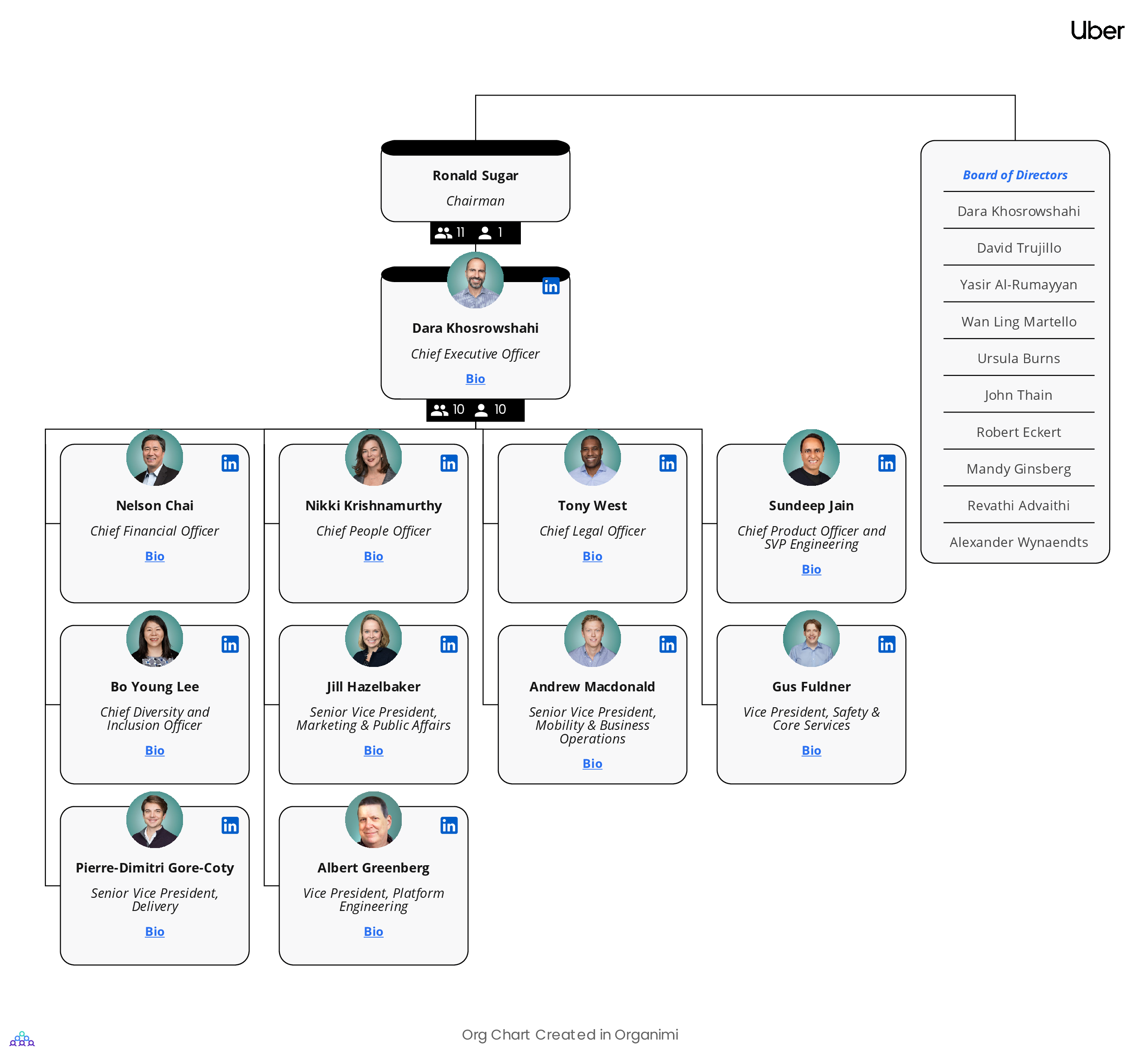 The company is ultimately led by CEO Dara Khosrowshahi. He was previously the CEO of Expedia which, under his leadership, grew into one of the world’s largest online travel companies.

Uber has undergone several changes to its org structure since the company was founded in 2009. More recently, in 2019, Uber’s CEO made headlines when he controversially eliminated the position of chief operating officer (COO) from Uber’s organizational structure following a failed IPO and a string of major setbacks.

In an interview, Khosrowshahi said that the role “no longer makes sense”, and that Uber’s ‘Rides’ and ‘Eats’ teams would instead report directly to him to enable problem-solving “in real-time”. Uber’s chief marketing officer role was also axed, with the company’s marketing operations merged with its PR, communications, and policy team under the ‘Marketing & Public Affairs’ umbrella.

While Khosrowshahi caught some flak for doing this, he is insistent that these changes were necessary to fix Uber’s lackluster organizational culture in a bid to turn around the business. Indeed, Khosrowshahi has been credited for creating collaborative work culture at Expedia where employees are encouraged to propose their ideas to management.

Although de-layering and streamlining the company’s organizational structure by eliminating key COO and CMO roles was viewed as a rather brash move, it can be argued that breaking down the internal hierarchy at Uber and turning it into more of a ‘flat’ organization will make the company more flexible in its response to the marketplace and external factors in the long-term. Other advantages of a flat org structure include streamlined communication between management and regular employees, lower operational costs, easier knowledge sharing, and increased responsibility among teams owing to the absence of middle management.

You can download the CSV file of Uber’s org structure, import it into Organimi and start editing this chart right away! Here’s how: