The Bank of America is one of the world’s largest financial institutions and the second-largest bank holding organization by assets in the United States.

Its beginnings trace all the way back to 1904 when a small bank named ‘Bank of Italy’ was formed in San Francisco, California by Amadeo Peter Gianni. Bank of Italy was born out of a desire to serve customers who had been turned away from other banking institutions. Most of these people were farmers who had come from Italy, thus the name Bank of Italy.

Today, the Bank of America Corporation provides banking and financial services to over 60 million customers.

This is necessary due to the large size of the Bank of America and the global scope of its operations. In order for operations to remain efficient and competitive, and therefore contribute to long-term growth, a structural framework is required that can accommodate variations across different regions and markets. It’s also important to note that a large history of mergers and acquisitions with other banking firms—for example, Merrill Lynch—has influenced the bank’s present structure.

The Bank of America Corporation org structure features an executive team at the top that is responsible for directing the bank’s long-term growth and development. A series of divisions and departments then cascade downwards with their own specific areas of focus, such as International, Retail, Consumer Banking, and Commercial Banking. This traditional type of structure is responsible for enabling strong bureaucratic control over organizational activities. 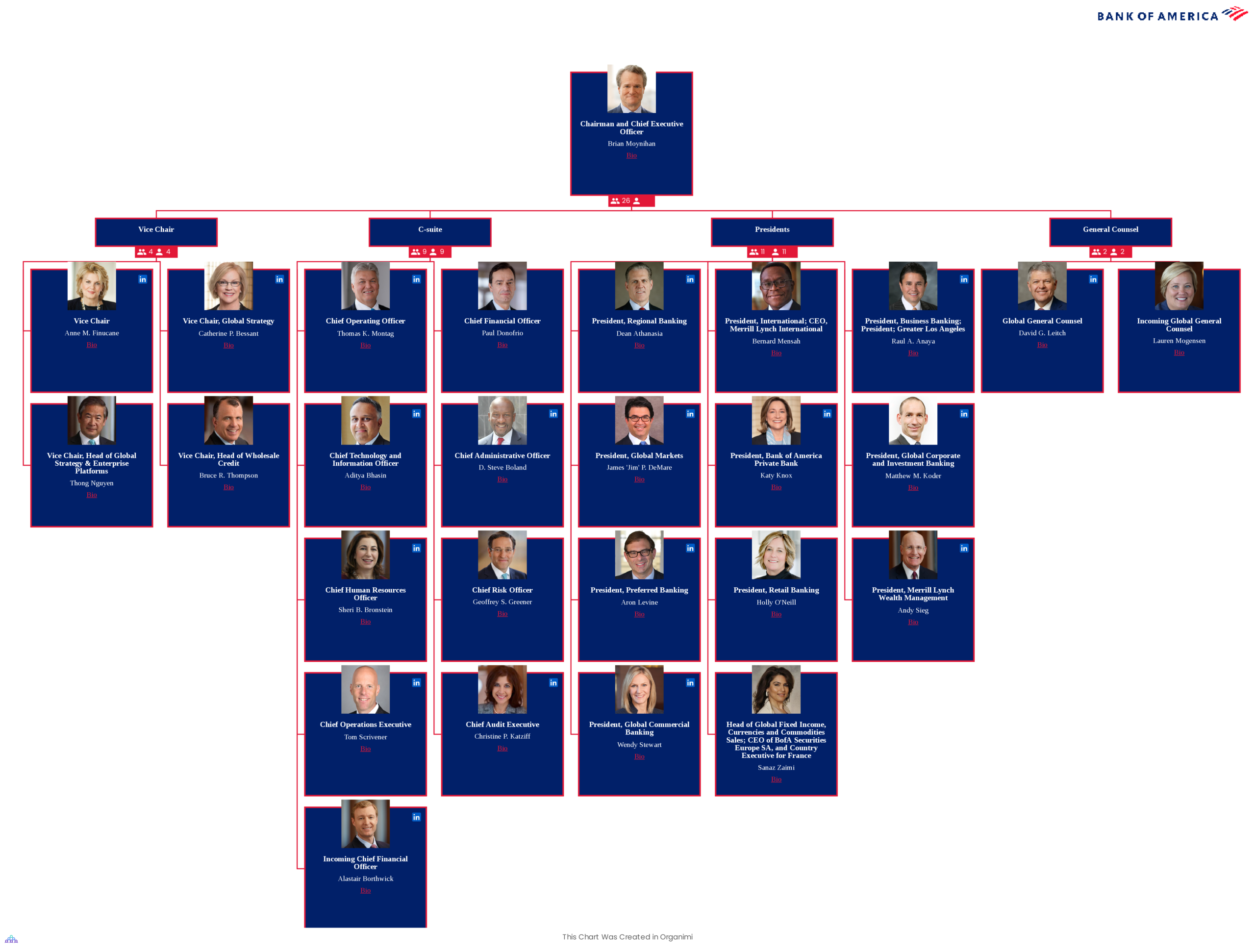 While Bank of America’s corporate structure is hierarchical, it actually takes the form of a sort-of U-form structure that combines the characteristics of a unitary (U-form) structure with other structural types, namely H- and M-form.

The U-form is the main overarching structure while some of the bank’s other operations use an H- or M-form structure.

This is the overarching system in Bank of America’s organizational design. All the company’s structural components, operations, and banking services are enveloped within this unitary design, which is a top-down hierarchy that forces the company’s various divisions to conform to the hierarchical arrangement.

In the U-form, Bank of America’s corporate leaders make the top-level plans and decisions that are then implemented across the board, including within subsidiaries and divisions.

The H-Form and M-Form Structures

Within the U-form structure, other business operations are arranged into H-form (holding companies) and M-form (divisions) structures.

The Pros and Cons of Bank of America’s Organizational Structure

Bank of America has a traditional hierarchical structure through its U-form org structure which envelopes the corporation’s various divisions and subsidiaries which adopt more flexible H-type and M-type structures.

The way the corporation is structured allows Bank of America to have the flexibility of a divisional arrangement that allows them to act as almost independent entities. And for all intents and purposes, save for having to follow the direction of the Bank of America executive team, they are. This allows the different divisions to work almost autonomously to achieve the bank’s core goals and objectives.

The disadvantage of having Bank of America’s executive team imposing rules and directives across the entire organization is that this doesn’t necessarily account for different needs and requirements on a regional level. While this is for the most part addressed through the secondary H-form and M-form structures that are encapsulated in the primary U-form primary structure, this doesn’t allow for complete flexibility.